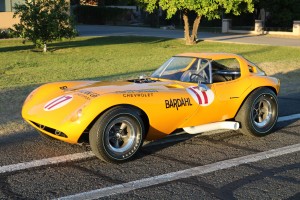 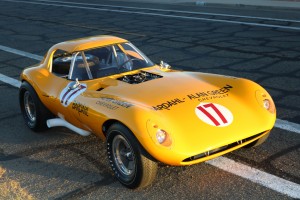 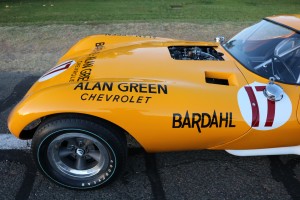 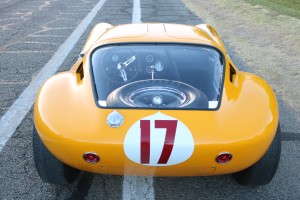 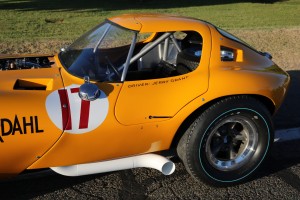 Bill Thomas Daytona Genuine I.D #16464003 1964 Cheetah built for Alan Green Chevrolet, Also sponsored by BARDAHL. Painted Mustard Yellow with white circles and Red #17 numbers. This is the 1st Fiberglass production Cheetah Ordered from Bill Thomas Race Cars. Certified by the official BTM Bill Thomas Motors of Arizona. The restoration is now completed as of May 22nd 2018 and all hand lettered just as delivered to Daytona Feb 64. It is now the 4th Genuine Bill Thomas Cheetah restoration completed here at BTM of Arizona. It is stunning in person. The Bardahl Colors Yellow and Black are just incredible.
We are very proud to announce, We have in our shop for restoration The Most Exotic powered 1964 Model Daytona Cheetah Driven by the Famous Great Racer Jerry Grant. Restoration started Jan 2015. Robert Auxier has done extensive research on the 3 Alan Green Cheetahs built for Alan Green Chevrolet out of Seattle WA. This Yellow Cheetah went to Daytona with the #17 on it with Jerry Grant Slated to drive it. With testing time completed at Daytona Jerry was running blistering lap times never before seen at Daytona, He was hitting 214,215 & 217 MPH speeds. It was a sight to see and made Shelby & Enzo very upset that day recalled Bill Thomas. Remember this is Feb 1964. The most Exotic 64 Model Cheetah ever built with a combination of the Bill Thomas lite weight Cheetah and C/E/C all Aluminum 58mm Weber side draft engine with the Grand Sport Alloy Rear 2.92 to 1 gear ratio Special code stamped in housing and ring gear stamped with O- Part number and a Jan 1964 Date Experimental. Well, all I have to say is check the top speeds recorded for the week at the Daytona Continental 1964 International Speedway. Great news is this was an SCCA/FIA Sanctioned event, Bill Thomas was given 4 numbers to use for his Cheetahs to race #14, #15, #16, #17 at this event. Jerry Titus wrecked the #16 entry (raced as #136 Riverside Feb 64) just days before it was to be shipped to Daytona. #17 was damaged in qualifying with Jerry Grant at the wheel. The front chassis section and suspension, plus the bonnet took a bit of a beaten. We just found 2 never before published Daytona pictures of this Cheetah and 1 is the most incredible Picture found to date of #16464003

Do (NOT) confuse this Genuine BTM Bill Thomas Motors Certified #16464003 Daytona Cheetah with the Pinkham/Yeakel Fake ID #BTC003 Cheetah. According to Pinkham/Yeakel the BTC stands for Bill Thomas Cheetah car #003 produced. Pinkham/Yeakel admitted the tag on there car was made up in a shop and the Famous Alan Green Chevrolet Daytona history was picked and attached to Pinkham/Yeakel Car. The Pinkham/Yeakel car was Black Listed in Feb 1988 by Bill Thomas himself when Pinkham sent Bill Thomas False ownership & History Documents. 4 years after Pinkham would make the fake tag install it and get a California Title under BTC003 12-6-1983.  Pinkham & Yeakel have stated in magazine articles there car is the 1st production Alan Green Cheetah #003. This statement is 100% (FALSE).  This Pinkham/Yeakel car has been reported to be #003, #004, #006, #007.  None are true to be fact. This Fake BTC003 Pinkham/Yeakel car BTM is in total Protest of its history. Rob Pinkham after reading the new Automobile Quarterly Vol 19 NO. 3 in 1982 Where Bill Thomas statement that the 1st fiberglass production Cheetah was ordered by Alan Green Chevrolet. Since Bill’s #001 & #002 Cheetahs both were Aluminum prototypes the Alan Green Daytona Cheetah would be #003 ID number built. Pinkham decided to produce a False BTC 003 ID tag and weld it to the chassis and claim his car is now #003 built. What Rob did not understand was Bill Thomas Race Cars Built Three (3) Cheetahs for Alan Green Chevrolet. Also Pinkham had Zero (0) information on Bill’s File ID number’s of production. This is the biggest Scam in Cheetah History. Straight from Bill Thomas himself I never used an ID number like it BTC003. Bill’s words its a fake ID number.